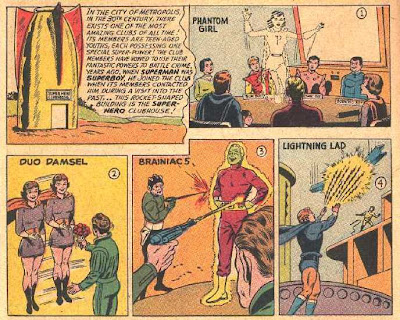 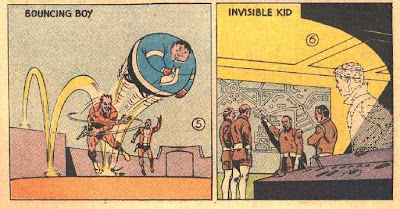 (1) PHANTOM GIRL (Tinya Wazzo) came from the planet BGZTK, wich occupies the same space as Earth, but in another dimension. She can dematerialize at will and pass through solid objects.

(2) DUO DAMSEL (Luornu Durgo) was known as TRIPLICATE GIRL until one of her three bodies was killed by the villainous thinking machine, COMPUTO. She comes from the planet CARGG, whose triple sun gives all natives the power to split into three bodies. DUO DAMSEL can still become TWO girls. A double date with her is REALLY double!.

(3) BRAINIAC 5 (Querl dox), of the planet COLU, is a descendant of VRIL DOX, the adopted son of the original BRAINIAC, SUPERMAN'S foe. Vril found a way to raise his brain to the 12th level, making it the equal of BRAINIAC'S computer mind; and a genetic change enabled him to pass this super-mind on to his descendants, including BRAINICA 5.

(4) LIGHTINING LAD (Garth Ranzz) gained the power to generate lightning bolts when he was attacked by lightning monsters on the plnaet KORBAL, and their blasts electrified his body. He is from a different world, WINATH.

(5) BOUNCING BOY (Chuck Taine), of EARTH, gained the power of super-bouncing when he drank a super-plastic fluid, wich he mistook for soda-pop. Scene shows him bouncing away from angry crooks with important papers.

(6) INVISIBLE KID (Lyle Norg), also of EARTH, is a young genius who invented a serum which enables him to become invisible. He uses his power to spy on outlaws.