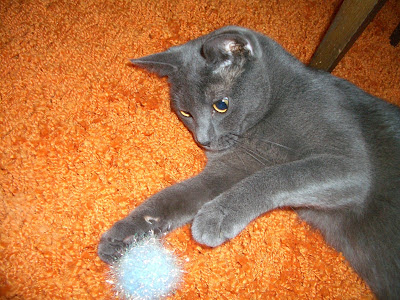 My kitty loves to play soccer.

USB jump drives are made in all sorts of designs, but this is awesome!

"Collaborations between organizations with different backgrounds often result in great realizations. To kick off LifeRemix, our group of bloggers collected a list of our 100 best "tips to improve your life." Leo Babauta, author of Zen Habits and member of LifeRemix, compiled the list." 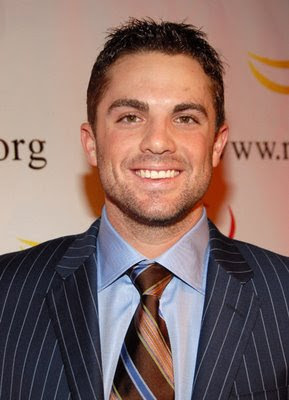 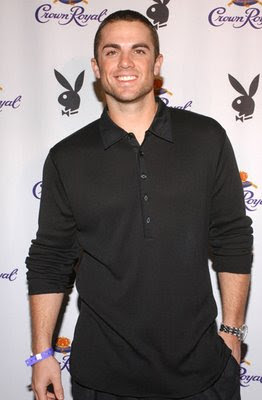 Other than the bigger LCD display screen, the mobile watch phone has a media player and a headset jack to connect your headset to it. There is no other information available at the moment. 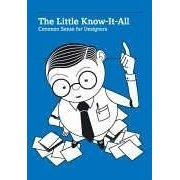 This book is divided into sections explicating unique vocabulary used in design, printing, typography and photography and includes helpful tips and concise analysis in contiguous areas such as advertising, mulimedia, business, copyright and project management. It is structured thematically and equipped with a resourceful index that references numerous sources and links. This indispensable manual is complete with graphics that illustrate and supplement the texts, making it a stimulating reference book for students and newcomers while serving as a trusty companion for professional designers and media professionals alike in their everyday work. 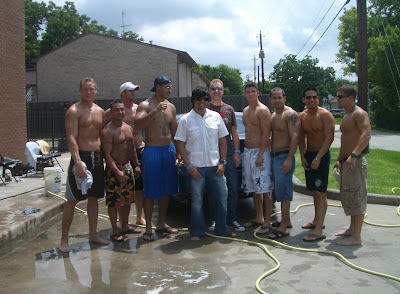 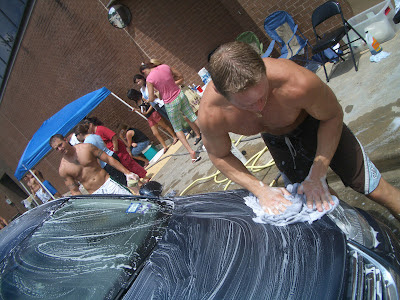 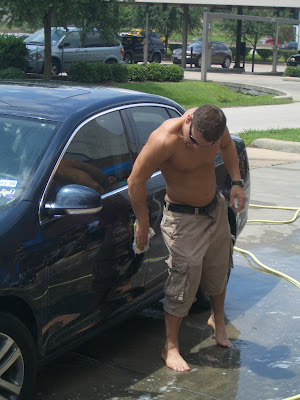 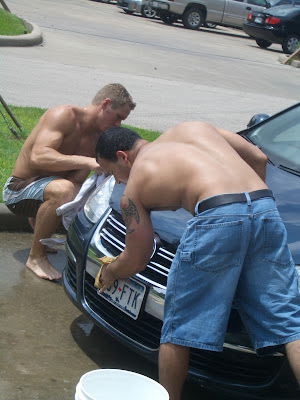 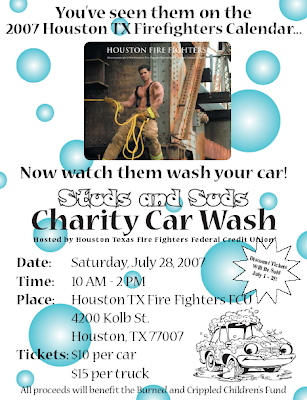 Insert any one of hundred entendres.

Eric suggested we stop by the Fireman's Credit Union for a Car Wash since it was so
right near our house off of I-10. I was reluctant because I did not want to ogle & it was going to rain. Once we got near the exit and saw two shirtless firemen waving cars in I changed my mind quickly. Eric was bold enough to take pictures and the coordinator there at the event suggested the group shot. What you do not see is 4 other woman taking our photo next to the woman using our camera. It was all so surreal and I think I blacked out at one point. It was a blur of soapy wet men, muscles and tattoos. 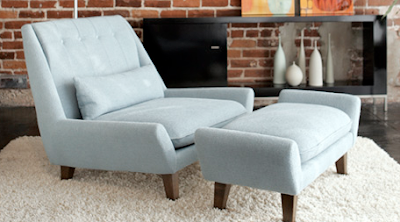 "The Oslo Ikea is opening up a no-charge hostel for shoppers who want to keep on shopping the next morning. It includes a bridal suite, and a luxury suite with breakfast in bed. Many Norwegians visit Ikea on holidays, treating it like a flat-pack theme-park. Guests also get to keep their sheets, and complimentary slippers, bathrobes, dinner and breakfast."

Dayum! Another reason to spend money I do not have.

http://youngfrankensteinthemusical.com/
at 11:52 AM No comments:

This is so lovely to me! 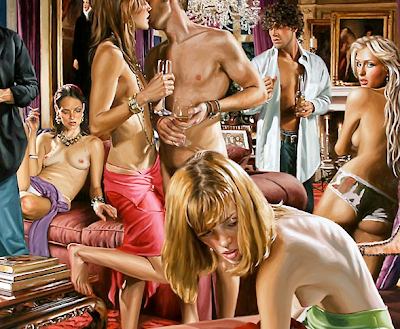 The Apotheosis of Pleasure

Terry Rodgers says "My hope is that ultimately these paintings show fragile, genuine human beings trying to make something of what they are confronted with. Each of them is unique in their individuality—in their hair, their eyes, their lips, their hands—and they are all separately struggling and often finding merely surface solutions and ephemeral escapes to the timeless riddles of consciousness." 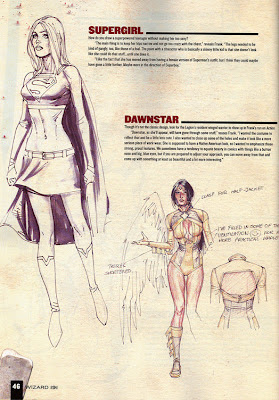 Wizard reports that Gary Frank is taking over Actions COmics with issue 858. It lookslieks he has plans for one of my favs Dawnstar. Dawnstar's unique powers include the ability to track life forms and objects across light years of distance and through interstellar space. She can survive in deep space for long periods of time without a spacesuit or oxygen. Dawnstar and other Starhavenites have pairs of large, white-feathered wings that grow out of their upper backs, the result of genetic engineering. In deep space, she can travel at faster-than-light speeds. In an Earth-normal atmosphere or in a sizable gravity well, her speed is diminished. She wears a Legion flight ring to signal for help, for monitoring of her location, and for other non-flight uses. She is an awesome character to me...sorta like an early Cher.

http://www.wizarduniverse.com
at 7:27 PM No comments: 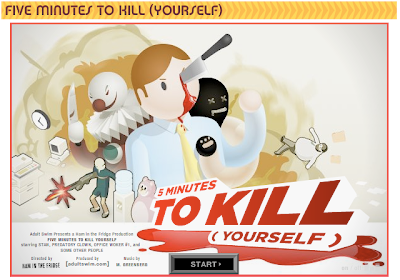 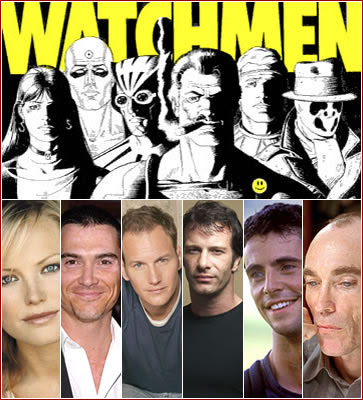 Watchmen is set in 1985, in an alternative history United States where costumed adventurers are real and the country is edging closer to a nuclear war with the Soviet Union (the Doomsday Clock is at five minutes to midnight). It tells the story of a group of past and present superheroes and the events surrounding the mysterious murder of one of their own. Watchmen depicts superheroes as real people who must confront ethical and personal issues, who struggle with neuroses and failings, and who - with one notable exception - lack anything recognizable as super powers. Watchmen's deconstruction of the conventional superhero archetype, combined with its innovative adaptation of cinematic techniques and heavy use of symbolism, multi-layered dialogue, and metafiction, has influenced both comics and film.

Cast for the movie from left to right: Malin Akerman as Sally Jupiter, Billy Crudup as Dr. Manhattan, Patrick Wilson as Nite Owl II (he was wonderful in Hard Candy), Thomas Jane (rumored) as the Comedian, Matthew Goode as Ozymandias, and Jackie Earle Haley as Rorschach.

The creators of "Wallace & Gromit" launch WebbliWorld. "An exciting, stimulating, virtual world that kid can explore, inhabit, belong to and share. It is a world that promotes caring, responsible behaviour and gives kids the opportunity to voice their opinions on topics that matter." 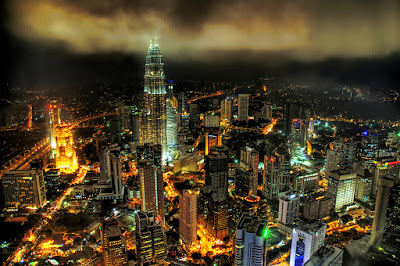 "The artwork below may look like a computer-generated graphic from a "Star Wars" movie, but it's actually a night shot of downtown Kuala Lumpur, Malaysia, made beautifully dramatic by the photographer, Trey Ratcliff, an Austin-based head of a video game company whose photographs have caught the eye of both art directors and fans of his young web site. Ratcliff has married a love of travel with a keen interest in photography and already has an impressive gallery of shots from around the world."

Land of the Giants 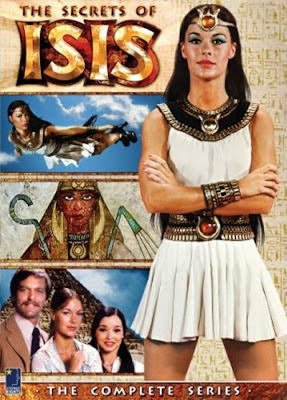 “Oh Zephyr winds that blow on high, lift me now so I can fly.” Isis got her start as part of the Shazam!/Isis hour on CBS in 1975 and was spun off into her own show for the second (and, sadly, the last) season. The DVD includes all episodes from both seasons, including 3 cross-over episodes with Captain Marvel from Shazam!. The DVD set also includes extensive special features.

Via Popgadget
at 6:18 PM No comments:

I so need these. I hate the regular fins.

These are fun. Check out the others below.

"Transit is designed by Stephen Hugo-Seinader and inspired by the Toronto subway system. Conceived to be a simple, clean expression of its function; Transit employs a modest use of materials for ease of manufacture. The body is rendered in powder-coated aluminum, with a high-density polyeurethane base."

It does not look like it is available yet, but look for it at the site below. 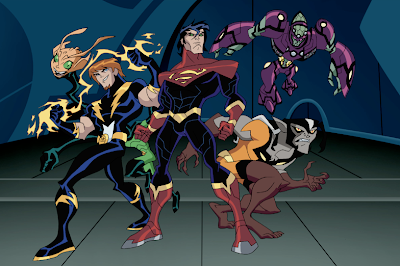 Newsarama posts that next season in the Legion of Super Heroes cartoon Superman will be much older in the second season when the Legion pulls him into the future, and from the artwork it looks like he’ll be dressed a lot differently than the traditional Superman costume.

Major Spoilers dot com has taken the time to write the history of several Legion of Super Heroes characters. I am a "major" fan of the LSH and this is so well written that I look forward to more. If interested take a look at the link below to see them.

http://www.majorspoilers.com/archives/category/hero-history/
at 10:55 PM No comments: 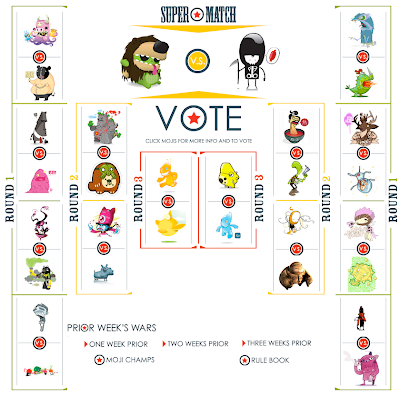 Are your ready to rummmmble?

Vote for the "best of the best" in the MojiWar, where the most popular characters are matched in face-off's to determine the weekly Moji Champ

Pre-orders begin today with the first boxes being shipped in early August. See www.tivo.com for details on ship dates. A subscription to the TiVo service is required and sold separately. TiVo HD will be available starting early August at Best Buy, Circuit City and other retailers for $299.99.

Update: no TiVo2Go on this system until a software update is offered. 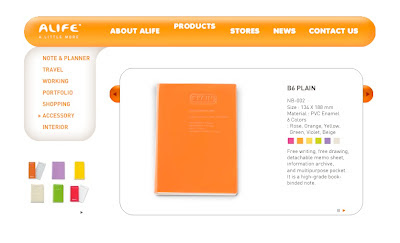 Target is carrying this line of products. It includes card cases, passport cases and notebooks in bright colors.

http://www.alifedesign.com
at 8:25 PM No comments:

McDonald's introduces the “Hugo,” a 42-ounce drink now available for as little as 89 cents in some markets. 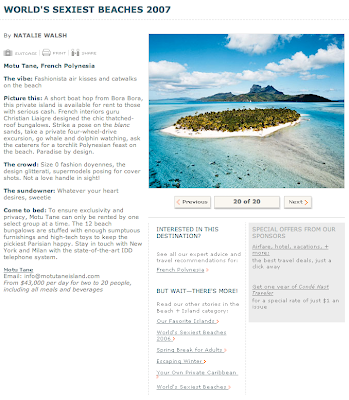 Concierge dot com has created a list of the sexiest beaches in the world for 2007. Let's go!

Now and again DNR will print this section of men's style in other cities.

Someone teased me about being a big nerd when I bought a leather eyeglass fob in Hawaii.

The day my TiVo died.

“The New Frontier,” an epic comic book story that follows Superman and other heroes of the DC Universe from the end of World War II through the cold war, will soon be seen in a new incarnation: a 70-minute animated film. The saga, which began as a six-issue series in 2004, has been published in one hardcover and two softcover collections and has inspired a line of action figures. Next week those attending the 38th annual Comic-Con International in San Diego will get a preview of “Justice League: The New Frontier,” a direct-to-DVD animated film from Warner Home Video due out in February.

This is on sale at Tumi. I am lovin' it.

Image via Julie Hoot
at 9:36 PM No comments: 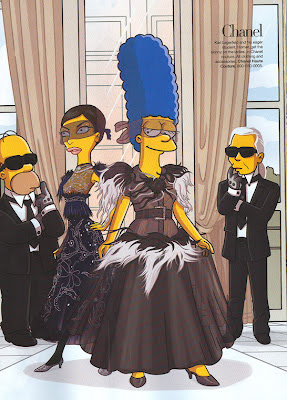 How cute is Marge? This editorial appears in the current Harper's Bazaar.

"Why men should buy baby clothes". Nothing is right about this baby t-shirt, but...

Dayum, this clever design is fun.

http://www.establishedandsons.com/
at 9:53 PM No comments:

Someone I know on-line is going to be crazy for this. Payam is in Las Vegas now, maybe
he will win enough to buy this at the link below.

Montefrio's utilizes patented XYZ Optics to maintain clarity at all angles of vision, even with six-base lens curvature. That means you get a crystal clear peripheral view that’s wide open, plus wrap-around protection against sun and wind.

"This was sent by a man in Rhinelander, Wisconsin. A very eventful day around here...A once in many lifetimes experience! Mark saw this lil' feller run out in front of a car- thought it was a lost baby goat. Stopped to get it, and WOW!! A real Albino Whitetail Deer." 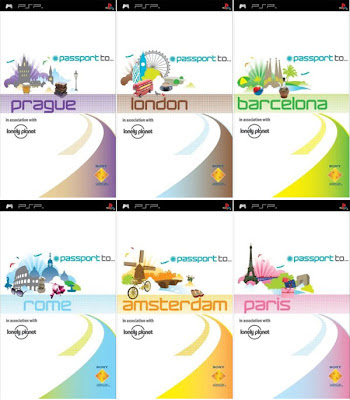 Exclusively available on PSP in association with Lonely Planet. Passport to... is a series of interactive, updateable travel guides made exclusively for your PSP. Discover the city with easy-to-use maps, inspirational 'off the beaten track' audio walks,
scene-setting movies, essential info and an audio phrasebook. Get the low-down on over 250 cafés, bars, clubs, hotels, shops and sights and create the perfect trip on-the-go with a customised itinerary builder, tailor-made to suit your own interests - plus - get all the latest Passport to? updates straight to your PSP from www.psppassport.com

http://shop.lonelyplanet.com/index.jsp
at 10:49 AM No comments:

These are at Fry's Electronics in my Houston hometown. If I did not have camo headphones, I would buy
one of these.